Oscar was a patient of mine who came in because he had some mild abnormalities – soft droppings, decreased interest in hay and some possible weight loss. His owner had started Critical Care before bringing him in. On exam he was definitely thin and his abdomen felt soft and doughy.

We took an xray of Oscar and found a ton of gas in the intestines! Definitely gut stasis. His blood work was normal and we started Oscar on various medications. When he returned for his followup appointment, he wasn’t back to normal – more weight loss, still not eating well…Xrays showed improvements but not what we wanted to see so back onto treatments he went.

We saw Oscar for other issues 2 months later – but the xray still showed gas! Since Oscar’s blood work was even better than previously we moved on to the next step. 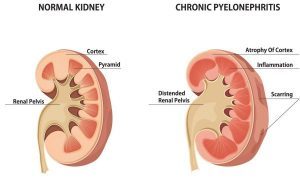 We found Oscar’s problem – both kidneys showed changes consistent with pyelonephritis (kidney infection). We put Oscar on 6 weeks of heavy duty antibiotics and his kidneys improved. There were no further episodes of weight loss or appetite changes.

How Can That Be?

Most of the time we aren’t able to identify the cause of gut stasis in rabbits and rodents like Oscar. Pain, fear and stress are common causes that may be already gone by the time we see our patients. Trying to figure out why the gut is slowing down is why we want to run tests like xrays and blood work. Basically – what is going on inside and is there anything else we need to worry about…

Some diseases, like pyelonephritis, are hidden. They don’t show up on xrays and they don’t make changes in the blood work until they’ve caused serious damage to organs. That’s where advanced imaging such as ultrasounds, CT scans and even MRIs can make all the difference.

But, just like with Oscar, we don’t start there! Oscar didn’t get better as fast as he should have and he had the gut stasis return. At that point we could tell something wasn’t right – we were able to investigate further and find his hidden problem.

We use cookies on our website to give you the most relevant experience by remembering your preferences and repeat visits. By clicking “Accept All”, you consent to the use of ALL the cookies. However, you may visit "Cookie Settings" to provide a controlled consent.
Cookie SettingsAccept All
Manage consent

This website uses cookies to improve your experience while you navigate through the website. Out of these, the cookies that are categorized as necessary are stored on your browser as they are essential for the working of basic functionalities of the website. We also use third-party cookies that help us analyze and understand how you use this website. These cookies will be stored in your browser only with your consent. You also have the option to opt-out of these cookies. But opting out of some of these cookies may affect your browsing experience.
Necessary Always Enabled
Necessary cookies are absolutely essential for the website to function properly. These cookies ensure basic functionalities and security features of the website, anonymously.
Functional
Functional cookies help to perform certain functionalities like sharing the content of the website on social media platforms, collect feedbacks, and other third-party features.
Performance
Performance cookies are used to understand and analyze the key performance indexes of the website which helps in delivering a better user experience for the visitors.
Analytics
Analytical cookies are used to understand how visitors interact with the website. These cookies help provide information on metrics the number of visitors, bounce rate, traffic source, etc.
Advertisement
Advertisement cookies are used to provide visitors with relevant ads and marketing campaigns. These cookies track visitors across websites and collect information to provide customized ads.
Others
Other uncategorized cookies are those that are being analyzed and have not been classified into a category as yet.
SAVE & ACCEPT